Last week in Asian Food in Australia: Not Authentic But Still Delicious, I briefly discussed whether it is actually right to classify one of Australia’s most popular snack the dim sim as Chinese cuisine.

After mulling about this over the past week, I reckon: perhaps.

The dim sim can be more accurately described as a Chinese-Australian culinary item. 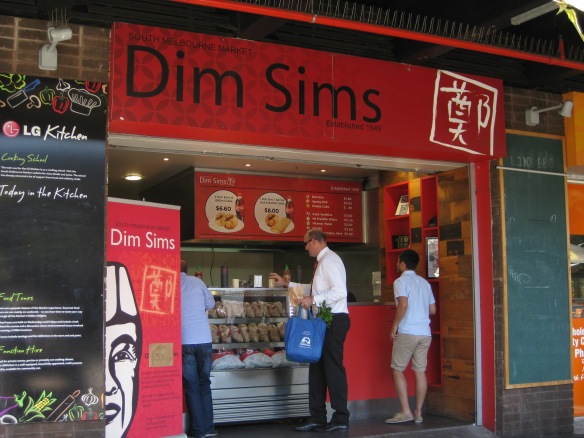 In a globalised world where mobility is rife, people, ideas and traditions are bound to transcend different corners of the globe. Even culinary methods and styles move across continents as chefs travel and share their cooking skills in foreign places. As such, a variety of gastronomic methods tends to influence the creation of contemporary cuisines in today’s food-mad world.

Created by Chinese chef William Wing Young in Melbourne around 1945, the dim sim is a dumpling comprising of meat usually wrapped in (thick and fried) skin in Australia.

Boasting distinctly Asian (Chinese) and Western (Australian) characteristics and flavours, the dim sim is arguably the epitome of “fusion food”.

Fusion food/cooking is food/cooking that is a fusion of two different culinary styles, combining at least two different cooking methods and ingredients to create a new dish and/or cuisine. “Food hybridisation” is a phrase that can be used to describe this process.

Some fusion dishes appear to exemplify the traits of a certain (traditional) cuisine more strongly than others. This can be confusing and can even put some of us off from calling these culinary items “fusion foods” and referring to them instead as simply Chinese, Japanese, English etc. food.

One may think that just because it is a dumpling, the dim sim is simply a Chinese culinary item (dumplings are made passionately and eaten ubiquitously by Asian communities everywhere). The dim sim also passes off as Western finger-food in that it is huge in size just like large servings of Western snacks, and fried Western style just like a considerable proportion of deep-fried Western food – hence why it can arguably be classified as fusion food.

(I tried the famous South Melbourne dim sim this week. I must say, the meat or filling of the dim sim I ate resembled and tasted almost exactly like the salty processed meat so often found in Australian sausage rolls. Another reason for it to be deemed Western food).

The dim sim was created by a Chinese person. Today, the famous South Melbourne dim sims in Melbourne are made by a Chinese family in a Chinese-styled red shop.

It is no surprise then that the strong presence of Chineseness surrounding the dim sim overshadows the fact that it was made in Australia and is essentially a popular Australian snack.

“Adding Asian to Western” or fusion food that boasts a strong “Western base” or origin is seemingly more common. In Australia, there are tons of recipes for this kind of fusion food, including those such as Asian-inspired pumpkin soup, Asian-inspired chicken salad and Peking Duck Pizza.

Quite often, many insist such cuisine is Western cuisine. Or Western dishes with a tinge of Asian flavours when it fact the moniker fusion food applies. Maybe this is because these dishes do after all have immensely strong Western origins or associations and some just cannot look past this, and so are reluctant to describe such cuisine as Chinese-Australian, English-Thai etc..

The famous South Melbourne dim sim, fried. It looks like a fried Western snack and it does indeed taste like one as I found out by trying it this week. Photo: Mabel Kwong

Truth be told, “fusion food” is a recent phenomenon and is only starting to gain attention with the rise of hybridised cooking. There always seems to be an air of apprehension surrounding the mixing and combining of different cooking methods or ingredients to create fusion dishes – these new creations may not please taste palates so used to consuming particular favourite traditional cuisines, and as such might not be readily acknowledged or accepted.

In an ever increasing multicultural Australia where more and more locals are warming towards ethnic foods on offer in their backyards, it would not be surprising to see more fusion dishes popping up on local menus in the near future.

As such, there is the strong likelihood that there will be more Chinese-Australian culinary items à la the dim sim sometime down the track in Australia, maybe even so much so that a unique name might be tossed up to describe this sort of cuisine. In Singapore, the blending of Chinese ingredients and Malay and Indonesian cooking techniques to create unique fusion dishes has become so common that locals officially refer to them as nonya cuisine.

When this happens in Australia, perhaps then we will truly embrace and acknowledge the emphatic presence of fusion food around us.

14 thoughts on “The “Dimmy” Dim Sim: A Chinese Or Australian Culinary Item?”