When it comes to yum cha, there’s lots to choose from on the menu. From dumplings to steamed rice to buns to deep fried seafood, the choice of dim sum is endless – and there are some dishes we’ll always insist on ordering because they are our favourites.

Over the years across Asia and Australia, I’ve eaten yum cha countless of times with the folks and friends and we always order the same dishes. We love them, we order them, it feels right eating the same dishes over and over. Only occasionally we’d order something we don’t usually eat. 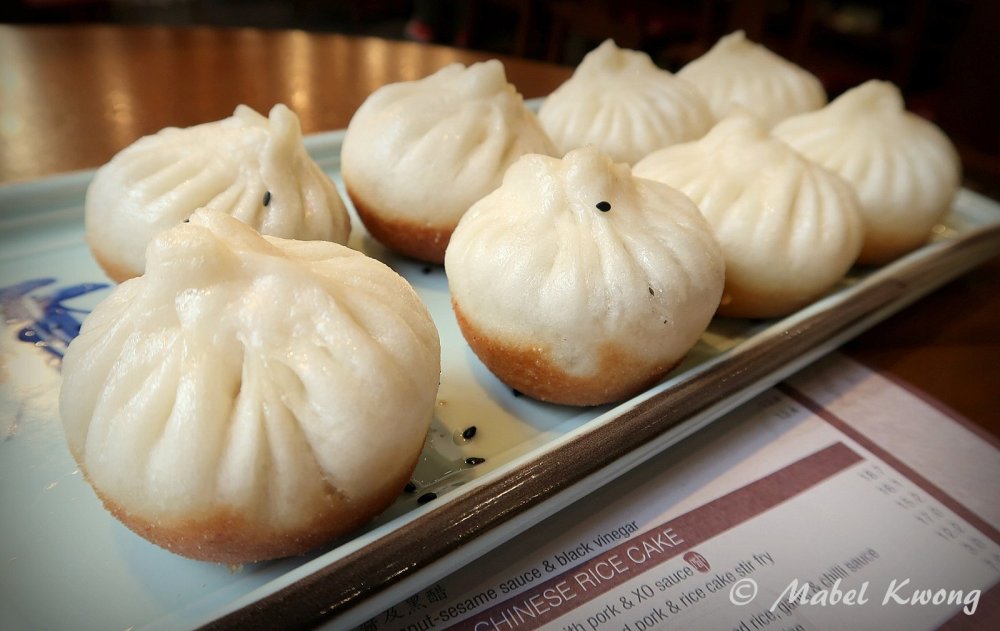 There’s always much dim sum to eat at yum cha.

Yum cha is traditionally a Cantonese brunch that involves Chinese tea and dim sum. Yum cha ( 飲茶) literally means ‘drink tea’. The meal originated in the Cantonese-speaking regions of China, and the meal can be traced back to the time when travellers on the ancient Silk Road stopped at teahouses for tea and snacks. On the other hand, dim sum (飲茶) are small serving dishes. These dishes are commonly carted around on trollies in restaurants and served in bamboo steamers or on small plates. Here are some typical, classic Cantonese-style dim sum dishes that are popular at yum cha:

Sīu máai are bite-sized dumplings. They consist of pork and/or shrimp filling, wrapped with yellow wrapper and topped with an orange dot made out of crab roe or carrot. Scallion, ginger and mushroom are commonly mixed in with the filling, which is usually soft and chewy. I’m not a huge fan of pork but this is one dumpling I never hesitate to eat, never hesitate to order. 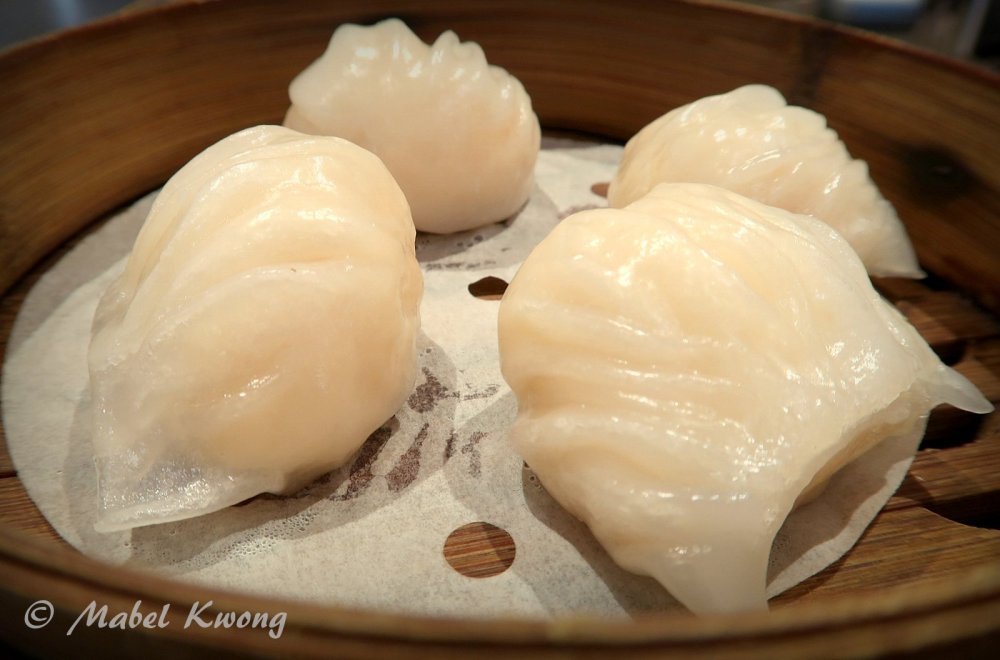 This is also known as shrimp or prawn dumpling. It’s a simple steamed dumpling: prawn wrapped in a smooth translucent wrapper. Often oyster sauce, sesame oil, ginger and bamboo shoots are used to season the seafood. It’s usually served together with sīu máai, and together they are called hā gáau–sīu máai. If the two dishes happen to be served at the same time, I grab one of each dumpling right away. 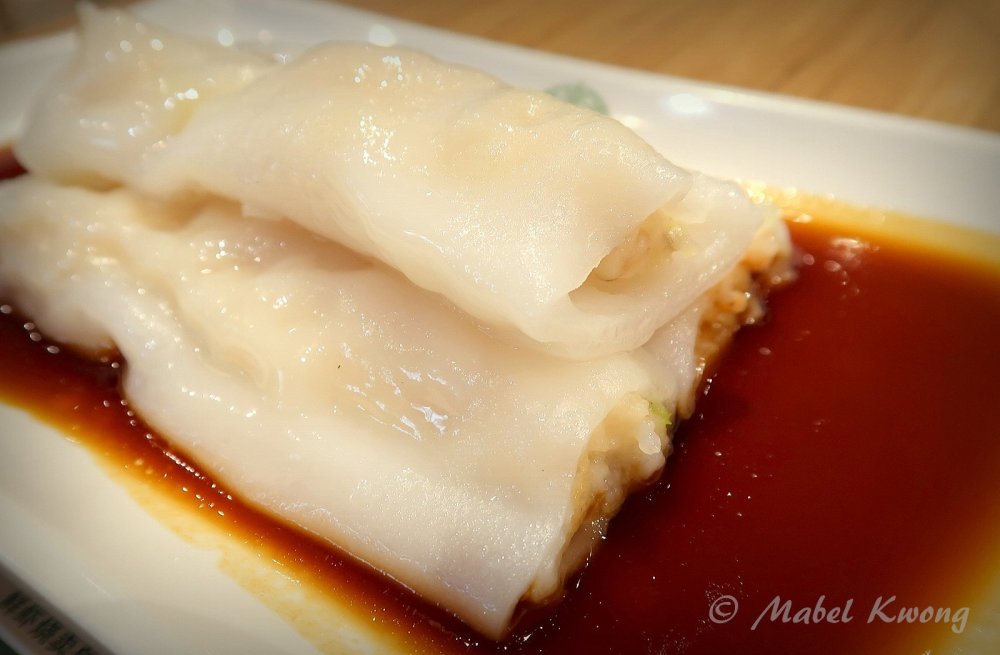 This rice noodle roll dish tends to be filled with chā sīu (叉燒, barbecue pork), shrimp or vegetable. Seasoned soy or sesame sauce is served together with the rolls. The English translation of chéung fán refers to intestines but this dish is not made up of intestines – it just looks like intestines. Arguably it’s one of the plainer dishes: the rice paper rolls themselves are plain and unseasoned. If made with precision, the rice noodles should be thin, soft and silky smooth – sometimes I find them slipping in between my chopsticks and almost impossible to put in mouth.

This is steamed glutinous rice, served with or without chicken and wrapped in lotus leaf. The sticky glutinous rice is cooked with oyster sauce and the centre is packed with mushrooms, shrimp, scallop, peanuts, pork and laap cheong (腊肠, Chinese smoked pork sausage). As one of the more filling dim sum dishes, it’s also one that comes in a bigger serve compared to the others mentioned here.

This dish is usually a hit or miss with me. Sometimes it leaves a bitter aftertaste in my mouth, which still lingers after drinking some Chinese tea. Not the kind of taste I like. As lotus leaf is considered a bitter herb, it’s probably the reason why.

This is turnip cake, made up of radish and also known as radish cake. It’s pan-fried and served up in square pieces. It’s soft on the inside with slightly crispy outer edges and sometimes there are small pieces of laap cheong mixed in. It’s a popular dish around Chinese New Year and the Chinese believe that this savoury cake brings good luck: loh bak go is synonymous (in texture) with lin go/nián gāo (年糕 glutinous rice pudding), which in itself is synonymous to the Chinese phrase nián nián gāo shēng (年年高升) – meaning ‘higher each year’. 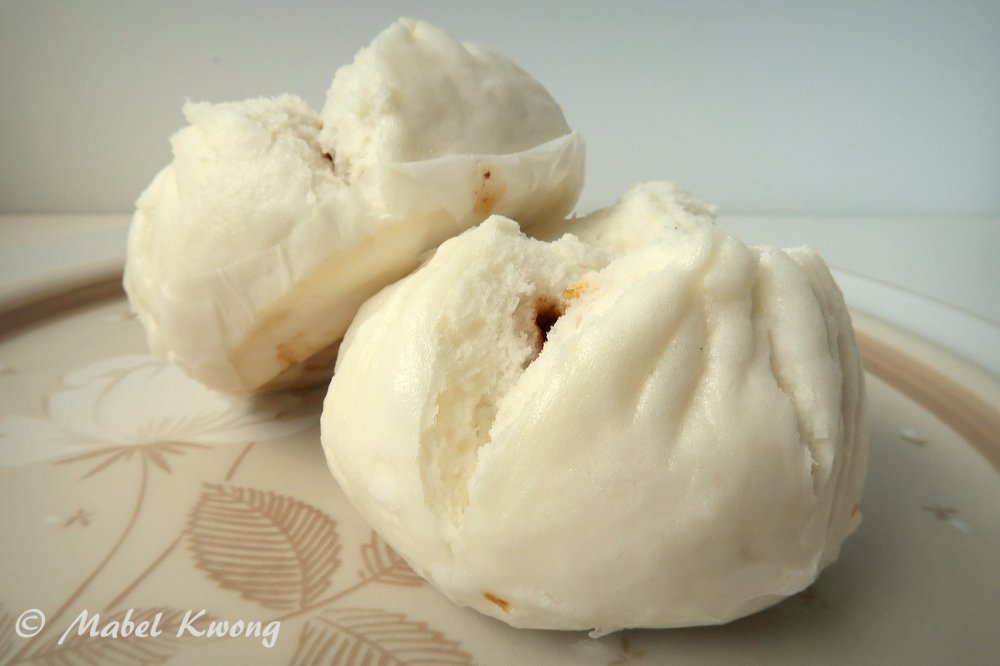 This bun comes either steamed or baked. The steamed one has a soft white fluffy outside and the baked one a glazed, crispy exterior. The centre of the bun consists of soft pork, corn starch, onions, sesame oil, soy sauce and oyster sauce. Quite commonly the pork filling is red in colour and that is usually due to marinating the meat in saltpetre before cooking it.

Growing up, I watched my parents peel the outer skin of steamed baos before eating them. They claimed the outer layer is dirty and not safe for consumption. Baos are commonly left out in the open before being warmed and served. Others argue that the outside of baos are dosed with sulphur water during the steaming process to ensure they come out white. I’ve eaten baos as they are, unpeeled, and have not gotten sick eating them.

Known as taro dumpling or yam puff, this is a deep fried delicacy. It has a savoury pork-filled centre covered with a thick layer of mashed taro, and the outer taro layer is fluffy, light and crispy. It’s one of my most-favourite yum cha dishes, and I’ve previoulsy eaten 4-5 of these in one sitting.

We all have our favourite kind of dim sum. A survey in 2015 showed that sīu máai was voted the most popular dim sum in Hong Kong while shrimp dumplings came second. In Australia, these two dishes are extremely popular as well. Perhaps some dim sum are more appealing than others: sīu máai and hā gáau are dumplings and as I wrote in this post, some dumplings remind us of familiar comfort foods that we love eating (i.e. dumplings resemble pasta and some of us love pasta).

Yum cha is a sharing affair and a meal where we want to share is a meal where we share a good time together. Translated from Cantonese, dim sum means ‘touch the heart’. At yum cha, dishes are designed to be shared: dim sum are commonly served bite-sized, one piece of dim sum and one bite for one person, pass that dish around, move on to the next dish, everyone gets to eat. Notably, while dining yum cha on a few occasions in Australia, I’ve seen Westerners eat entire dim sum dishes individually and their dining companion have their own plates of dim sum. From a Chinese perspective this comes across as odd but in the general sense there’s nothing wrong with that since all of us have different ways of consuming food.

These days where and how we eat yum cha is changing. Frozen dim sum is normally sold in grocery stores in Australia today. Vegetarian dim sum options are usually on the menu these days too (e.g. Red Ginger and Din Tai Fung). Also, it’s common for many Chinese restaurants that serve à la carte meals to also serve à la carte dim sum too. That is, in Australia one can order dim sum as a side dish to a main meal, and eat dim sum any time, all day, every day.

A few times on the weekend I’ve eaten solo at Tim Ho Wan, the cheapest Michelin-starred restaurant. While the portions here are small and I could get more dim sum for the same price elsewhere, the dim sum does taste more flavourful compared to some other yum cha places I’ve been to in Australia.

On one of these occasions at Tim Ho Wan, a Western couple who looked to be in their forties sat next to me. The woman beside me seemed upbeat and eager to try everything. The man in front of her on the other hand seemed restless and did not look like he was in the best mood – picking up a chopstick and fidgeting with it in his fingers, saying that he wasn’t sure what the menu (with English translation) meant and eyed the two colourfully dressed Asian girls at the next table who were chatting away in Cantonese. Rather brusquely, he said to his companion, ‘It’s like another world in here’.

He probably was open-minded enough to walk in and have a seat in a Chinese restaurant that he never tried before. He probably would remember his time at this restaurant whether he liked it or not. Having finished my dim sum, I got up, paid for my meal and left with a reflective mind – and also feeling very full, not wanting to overthink what I just heard.

Often yum cha feels like a treat. Or at the very least a meal that makes us curious enough to try it. And then want to come back for more.

Do you like eating dim sum / dining yum cha?