The “Diversity Dictionary” are posts where I try my very best to explain in plain English common words and phrases that we often come across while reading articles/papers/stories about multiculturalism and diversity. It’s always good to learn new lingo as learning is always good. It’s educational. Part I can be found here.

This phrase is used to compare people, in particular comparing people of different ethnicities or backgrounds. 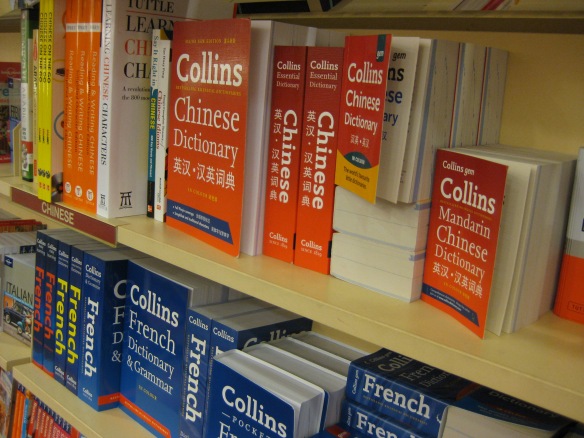 One of the ways to be less afraid of and understand the ‘Other’ is to appreciate their cultures and even learn their language. Photo by Mabel Kwong.

Henri Taifel and John Turner have linked “Us” and “Them” to the concept of social identity theory which is the idea that a person’s sense of self is based on their membership of social groups such as class, age and faith.

Both argue that quite a number of us divide the world into “Us” and “Them” by putting people – at the very least mentally – into social groups, in-groups and out-groups.

As such, “Us” is often used in reference to ourselves and/or people who we usually regard as normal, sane and comfortable with, usually people of the same race or nationality. “Them” refers to people or those perceived as different from us in terms of ethnicity, personal attitudes or cultural values.

“Us” and “Them” is in a way a rather unfavorable phrase as it is a concept that is grounded in the ideals of social categorisation. In line with the above explanation, the phrase perpetuates the ideals of stereotyping, discrimination and prejudice.

“Other” is frequently used in tandem with “Us” and “Them” and like this phrase, is associated with the ideas of stigmatisation and prejudice.

Jean-François Staszak terms the “Other” as a “member of a dominated out-group, whose identity is considered lacking and who may be subject to discrimination by the in-group”.

According to Staszak, the concepts of “Other” and “Othering” – the latter simply meaning “to exclude” – date back to the eras of Western colonialism where Western ideas were exported to develop communities: the “construction of otherness is based on a hierarchy of civilisations and requires the use of a universal criterion that allows their comparison”. Civilisations that were deemed primitive or lacking a specific culture within their communities were considered outsiders and therefore “Othered”.

In other words, the “Other” is constantly assumed as individuals who are excluded from a group(s) – or even activity – on the basis that they do not possess one or more of the typical traits associated with that particular group(s).

Alina Sajed states very simply that “hybridity can be defined as the process that involves a mixture or a combination of two different elements, which results in a third element that claims a difference from either of the two terms”.

Hybridity is essentially the blending or fusion of two different elements resulting in the formation of something new that embodies aspects of both original elements.

With reference to Ien Ang (in her book On Not Speaking Chinese), it is worth noting that hybridity is “not only about fusion and synthesis, but also about friction and tension, about ambivalence and incommensurability”.

That is, there can be some discontent or some sort of loss surrounding the process or end-result of the fusion of two elements and the creation of new mixtures. Food fusion is a one such example. In the instance of mixing a traditional Chinese dish with a Korean dish to form a distinct hybrid Asian dish, there is always the likelihood that society will warm immensely towards the newly created cuisine and forget or at the very least barely bat an eyelid towards the traditional ones.

Benedict Anderson notably coined the term “imagined communities”. It is used with reference to large groups of people residing in a specific place.

Anderson writes “imagined communities” or nations are “imagined because the members of even the smallest nation will never know most of their fellow-members, meet them, or even hear of them, yet in the minds of each lives the image of their communion”.

In other words, “imagined communities” entail the idea that although one does not meet their fellow citizens face-to-face, one would still naturally feel a sense of connection – most likely as a result of partaking in similar activities or traditions – with their countrymen and their country, nation or homeland.

At the most basic level, “Orient” refers to the “East” and “Oriental” a word used to describe anything boasting Eastern features or characteristics.

Edward Said has written extensively about these terms. In his book Orientalism, Said writes that the “Orient” is “the other” for the West; it has helped defined the West as its “contrasting image, idea, personality and experience”.

For Said, “Orientalism” is a rather academic term and is a style of taught based upon an “epistemological distinction made between “the Orient” and “the Occident (the West)” especially during WWII when Europe colonised much of Asia.

In line with this thought, Said also argues that “Orientalism is a Western style for dominating, reconstructing and having authority over the Orient”, and the “relationship between Occident and Orient is a relationship of power”.

In short, the “Orient” refers to the East; it is a concept used to differentiate between, or separate, the East and the West, brimming with the underlying idea that there can be uneven power relations between the two.

There will be more ‘Diversity Dictionary’ posts in the future. Meantime, it’s back to more in-depth posts about Asian-Oz perspectives and diversity next week.