Chinatowns in Western cities across the globe are constantly dubbed as not only sites that are a home away from home for the Chinese living here but also multicultural hubs.

Hubs where non-Chinese locals can meander about, appreciate Chinese lifestyles/food/products and chat with their Chinese community members. Hubs that promote camaraderie amongst people of various races. 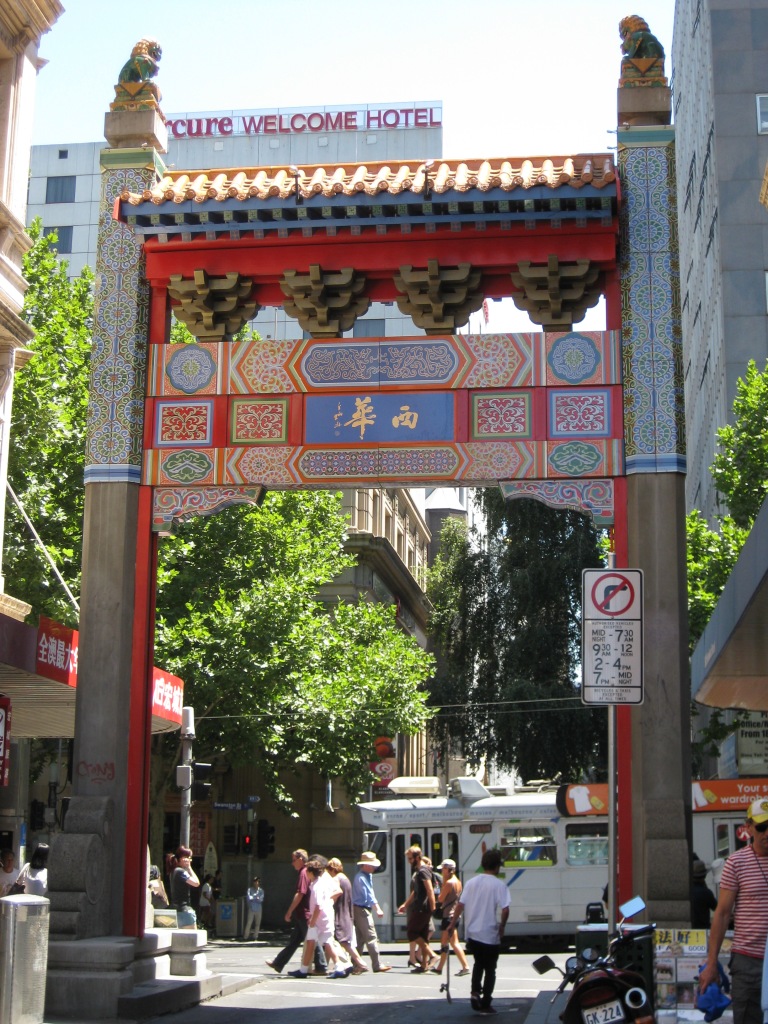 The back of the front entrance of Melbourne’s Chinatown. The arches embody traditional “Chineseness”, but also stereotypical notions. Photo by Mabel Kwong.

Or so many of us think. There is always more than meets the eye and as clichéd as it sounds, we should never naively judge a book by its cover. Even Chinatowns.

Chinatowns in Western society arguably go against perpetuating the notion of multiculturalism to some extent. There has been debate about how Chinatowns historically and still today are spaces that do not wholly embrace cultural pluralism, and instead promote ethnic enclaves and project Western Orientalist constructs of the East.

And it is worth remembering that the development of Chinatowns is constantly state-controlled and state funded, furthering this unfavourable latter argument.

Looking past the fact that they are places that buzz with life with hoards of people everywhere, at times it is fair to call Chinatowns racist – at the very least Melbourne’s Chinatown – and view them as cultural ethnic sites tainted with white supremist, capitalist ideals.

Certain behaviour and physical aspects of Melbourne’s Chinatown encourage the local Chinese to band together and crudely putting it, “stick with their own race”.

Walking through Melbourne’s Chinatown, I frequently see Chinese customers chat with the Chinese shopkeepers here in Cantonese, all completely ignoring some confused-looking, English-speaking only Caucasian customer clearly wandering around the latter’s shop. Such attitude is undoubtedly downright discourteous, and not surprisingly dissuades those around them who do not speak the language to interact with them and partake in their ‘exclusive conversations’.

There goes the slightest opportunity for one of Anglo-Saxon heritage who does not speak the language to jump in on a conversation he or she may very well be interested in if understood and converse with someone of a different background.

Constant upgrading and redevelopment of Chinatowns emphatically provides brighter facades to the precincts but they also favour Western society in economic and social contexts. Professor Kay Anderson at the University of Western Sydney argues in his paper Chinatown Re-oriented that Chinatowns have long been a locus of renewal of white Australian conceptions of the Chinese, or European constructs of the Asian race (e.g. Asians are the weaker race). Anderson further writes in regards to racialisation and the categorisation of people based on their cultural features:

“Whatever the strength of peoples’ emotional attachment to their origins, the ascriptions are what allow prejudice and discrimination on the part of more powerful groups to occur and continue.”

A modern-looking, upgraded ‘white’ Chinatown can steer us away from paying attention towards fundamental Chinese cultural values that are often essential in assisting us in understanding our Chinese counterparts.

Melbourne’s Chinatown was established during the 1850s ‘Gold Rush’ period when many Chinese abroad migrated to Victoria in search of gold. Many of these immigrants and their district associations purchased land in Little Bourke Street and built clubrooms that served as meeting places for the Chinese community. When the gold-rush ended, many stayed and set up businesses in this area catering to local Chinese – and later underwent upgrades to cater to non-Chinese markets.

The Village Boulevard in Melbourne’s Chinatown has undergone extensive renovations and today resembles a modern state-of-the art spacious shopping laneway – deprived of cramped, dank Chinese coffee shops where you can sit and chat with one another and traditional Chinese architecture and character. It boasts white tiles, ample light and an airy ambience. Travel agencies, bubble-tea shops and beauty salons line this laneway prominently and are hard to miss. 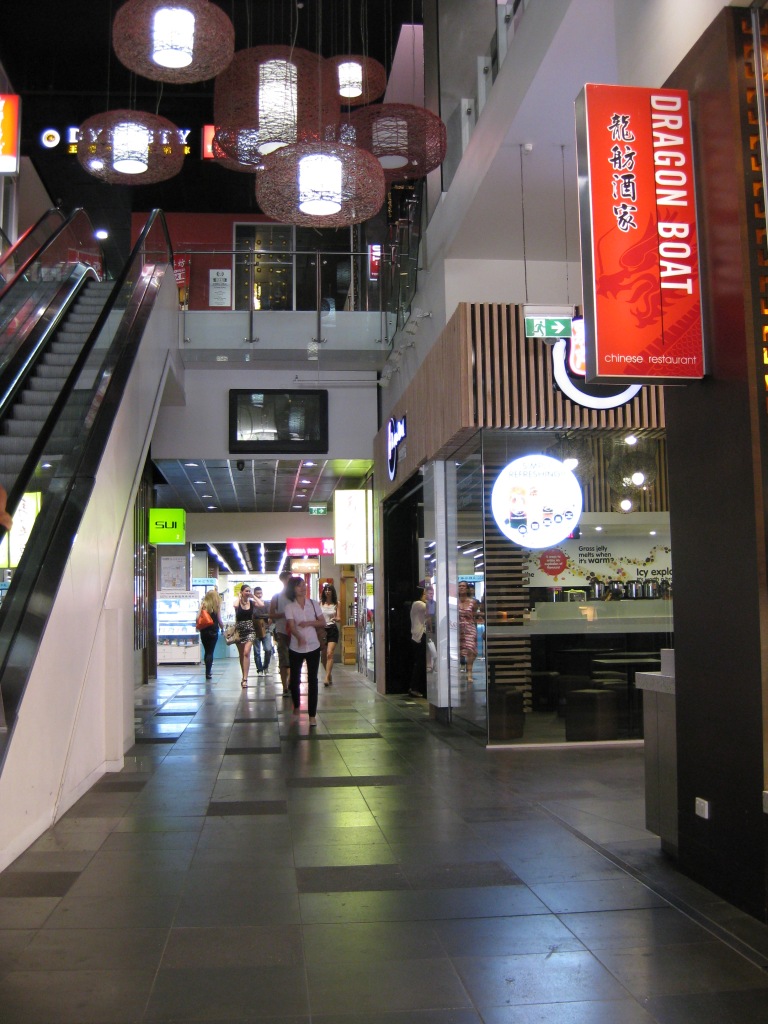 The refurbished Village Boulevard in Melbourne’s Chinatown. It boasts brand new stores and is incredibly roomy. Photo by Mabel Kwong.

Yes, many Chinese are very, very proud of their homelands and food and take pride in their looks. However, bright, clean, open, safe, cooling and spacious are elements that naturally appeal to the Anglo-Saxon community who are typically used to having first-rate facilities and developed spaces in first-world Western countries. Furthermore, Melbourne’s Chinatown was consistently upgraded in the 1970s to eradicate ghettos and ethnic enclaves in order to make it friendlier and hence more appealing to the majority Anglo community.

More importantly, judging from Melbourne’s Chinatown, we are highly enticed to partake in capitalist consumption as opposed to socially interacting with one another. In other words, it is fair to say Chinatowns are commodified, individualised capitalist-driven spaces that function as tourist attractions and/or cash-cows for the state.

In addition, currently Melbourne Chinatown’s Mid City Arcade (a laneway with shops) is undergoing a similar makeover. It is worth noting the Chinese Museum, a place where one can actually learn about Chinese history and customs, is tucked away rather obscurely at the back of a gloomy laneway. It is almost as if it is deliberately hidden with no clear signage signalling the Museum’s presence; traditional Chinese conventions are seemingly slowly being eradicated as Chinatown is brought into ‘civilisation’ through constant infrastructure upgrades.

As Anderson argues in her paper, ancestral culture can be “filtered, commodified, and reified by and for white Europeans” when Chinatowns undergo redevelopments.

Building upon this argument, such contemporary transformations of Chinatowns today debatably dilute the authentic Chinese experience here. That is, authentic “Chineseness” can at times be hardly felt.

Today, an influx of Asian cultures has descended upon Melbourne’s Chinatown. Japanese, Korean and Thai restaurants have mushroomed here in recent years, located alongside eateries serving Chinese cuisine. And honestly, with their bright distinctive Asian colours (think red) and ethnic restaurant names spelt out in the alphabet, all these Asian restaurants look the same.

Perhaps this encourages Caucasians to think that all Asians, most of whom possess different backgrounds and different beliefs, come from the same one place.

Perhaps this encourages local Anglo-Saxons to think that Asians are one mass of people with their hearts intent on setting up businesses in one secluded place in Australia.

As such, Chinatowns are seemingly turning into an “umbrella space” where all things Asian converge, blurring the lines of what is Chinese and what is not Chinese. Thai, Japanese and Korean restaurants have sprung up of late in Melbourne’s Chinatown. Is there still room for authentic Chinese food? Photo by Mabel Kwong.

There are positives to arise out of modern Chinatowns located in the West today. For one, the addition of shops and eateries selling modern hybrid Chinese cuisine and drinks showcase the modern facet of Chinese culture and lifestyles.

Also, there is nothing really wrong – it is just a little rude – conversing in one’s mother tongue with friends of the same race when there are others around who do not speak the language. In fact, speaking an ethnic tongue is highly encouraged in Western societies in order for one to maintain their level of fluency in the language.

However, at the end of the day, such isolated yet lively corners of Chinatowns threaten to considerably overshadow the exemplification of traditional Chinese customs, practices and beliefs to an uninformed public and instead perpetuate individualised, consumerist ideals.

Understanding a culture’s history or at the very least the important values underlying it is key to comprehending one another’s cultural differences, assisting us in getting along with people of other races.

How are we to foster positive relations between our Chinese counterparts when we shy away from respecting various ethnicities and authentically showcasing each and everyone’s heritage in our own backyards?

2 thoughts on “The Dark Side Of A Vibrant Chinatown”