Like many other people, I was aghast by two recent disgusting, intoxicatingly negative episodes that happened in Australia.

Earlier this month, commuters on a packed suburban Melbourne bus ride hurled racist and violent threats at a fellow passenger, a French woman who was singing in her native tongue. Video footage of this incident shows a middle-aged man yelling at her to speak English and all the worst obscenities possible. A man pushing a pram chimed in to the xenophobic chorus, shouting vulgar phrases at her.

People of all backgrounds going about their own business in Melbourne’s CBD. No fuss, no drama. It’s like this almost everyday. Photo by Mabel Kwong.

At the beginning of the month, Channel 9’s A Current Affair broadcasted a report titled “All-Asian Mall” that investigated the apparent “Asian invasion” of a shopping mall in NSW suburb Castle Hill. This television segment emphatically stated the mall was receiving an “Asian makeover” with four Asian food shops moving in and (white) Aussie shopkeepers were unfairly forced to move out as a result. This was later refuted.

Local and international media have jumped all over these two xenophobic events, purporting that racism is rampant Down Under.

Yes, the incidents showcase Australia as a racist country. Do they smear the country’s multicultural image?

But do they really affect acts of multiculturalism within Australia?

Multiculturalism still manifests considerably amidst the everyday, banal activities around us that most of us do not stop to see.

A few days ago, I waltzed into the sushi shop near my place to pick up some lunch. While fidgeting and deciding what to order, I saw quite a few presumably regular Anglo-Saxon Aussie patrons merrily chatting with the cashiers of Korean ethnicity about their upcoming silly-season holidays in their strong Aussie accents after paying for their sushi. Big cheery smiles all round.

The day after that, I was chowing down lunch at a food court, minding my own business and a gaggle of three schoolgirls in their school uniforms, two Caucasians and one Asian, plonked themselves on the table opposite me. One of the Caucasians proceeded to shovel fried rice into her face and laughed along with the Asian girl as the latter told jokes.

Not only are Australians munching on delectable Asian foods, they are also enthusiastically conversing with one another regardless of background.

In the past week, twice I spied a Caucasian-Asian couple strolling together hand-in-hand down the bustling streets of Melbourne’s CBD. Each half of the couples definitely have at least some form of respect for their partner’s cultural heritage if they are to be brazenly, intimately holding hands like that in public.

And just last weekend, the Japan Culture and Arts Festival was back for the third time in Melbourne. I trooped down to the event and was heartened to see Caucasians attempting Sumie (Japanese ink painting), trying their hand at Aiki-Dou (martial arts) and even MC-ing events on stage side-by-side with people of Japanese ethnicity.

Diversity on display all round.

Fact is, thousands of migrants still live in this country today despite the unfavourable incidents.

Fact is, most of them aren’t going anywhere.

And more often than not, Anglo-Saxon Australians accept this as part and parcel of life and hardly show animosity towards them.

Outrageous racist incidents don’t occur on every street corner, every minute of the day. They are what you can arguably call isolated xenophobic incidents.

The two recent attention-grabbing, outlandish incidents in Australia boast no correlation with the array of minute yet heart-warming multicultural-infused simple, ordinary gestures or actions around us.

It’s not all that surprising no one really verbally stood-up for or came to the defense of the poor French woman on the bus. For one, onlookers risked making their fellow commuters habouring xenophobic attitudes more irate and potentially getting physically bashed if they did intervene.

More importantly, given that quite a number of Australians are welcoming of other races, no one really wants to associate themselves with such a disgraceful, racism riled situation. Chances are most of the passengers on the bus wanted to be anywhere but near those silly people saying silly things, and they had every right to wish for the moving floor to open up and swallow them whole. Who can fault them for being too embarrassed by such behaviour to even glance at the revolting scene?

And like any other fracas that ruffles feathers and fades away after a while, this bus incident will eventually die down.

Case point the Castle Hill mall at the centre of ‘Asian-invasion’ controversy. It’s now business as usual here where Asian and non-Asian shopkeepers alike are working side-by-side, and the media storm around this place has dissipated.

Judging by these two racist occurrences, racism no doubt exists in Australia. Racism even exists at the institutional level here where ethnic minorities are discriminated in the workforce. 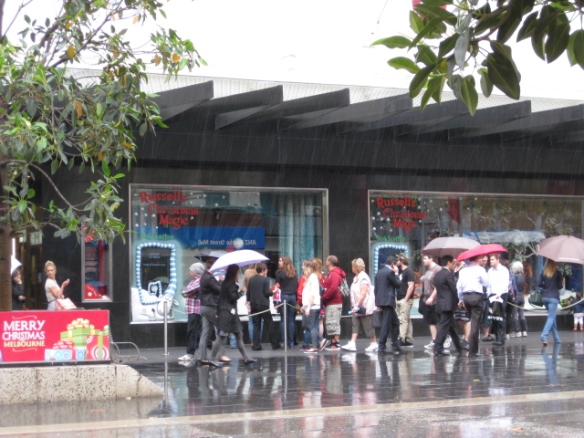 Even on rainy days, most people are decent enough not to purposely push or shove one other to the slippery floor for a laugh. Photo by Mabel Kwong.

But at the end of the day, there’s no denying multiculturalism has its place Down Under at the community level, embedded within the most mundane motions in our everyday lives.

We should embrace the tiny moments of multiculturalism in our own backyards. It would definitely be very much pleasant to live in a society where everyone respects one another for their customs and beliefs, wouldn’t it?

Dwelling too much on racist hullabaloos and tirades merely puts the focus on racist attitudes and perhaps stirs up even more animosity between different ethnicities, overshadowing the diversity that actually exists within any community. For any racist incident that happens around us, it would be practical to examine it, see if there’s any feasible means to help the victim(s) or prevent similar situations and then move on from it.

Ultimately, we should focus on learning how to understand one another and our differences in order to encourage all of us to get along.

And we can do this by staying optimistic – and optimism is heavily encapsulated within the whole concept of multiculturalism.

We need to believe that multiculturalism can exist in society today. Which it already does.

1 thought on “Diversity Is Here To Stay, So Let’s Embrace It”